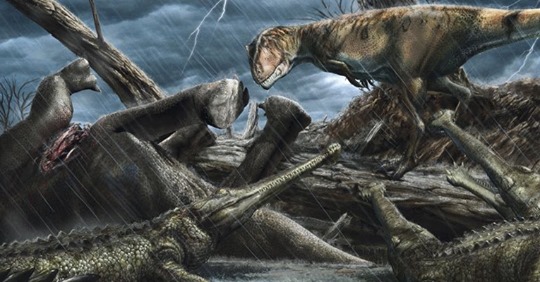 100 million years ago the Sahara was the most dangerous place on Earth. Researchers from the Universities of Detroit, Chicago, Montana, Portsmouth (UK), Leicester (UK, David Unwin), Casablanca (Morocco), and McGill (Canada), as well as the Paris Museum of Natural History, have published the biggest review in almost 100 years of fossil vertebrates from an area of Cretaceous rock formations in south-eastern Morocco, known as the Kem Kem Group. Fossils from the Kem Kem Group include three of the largest predatory dinosaurs ever known, including the saber-toothed Carcharodontosaurus ( with enormous jaws and long, serrated teeth up to eight inches long) and Deltadromeus ( a member of the raptor family with long, unusually slender hind limbs for its size), as well as several predatory flying reptiles (pterosaurs) and crocodile-like hunters . For the complete picture go to:https://scitechdaily.com/most-dangerous-place-in-the-history-of-planet-earth-revealed-by-paleontologists/